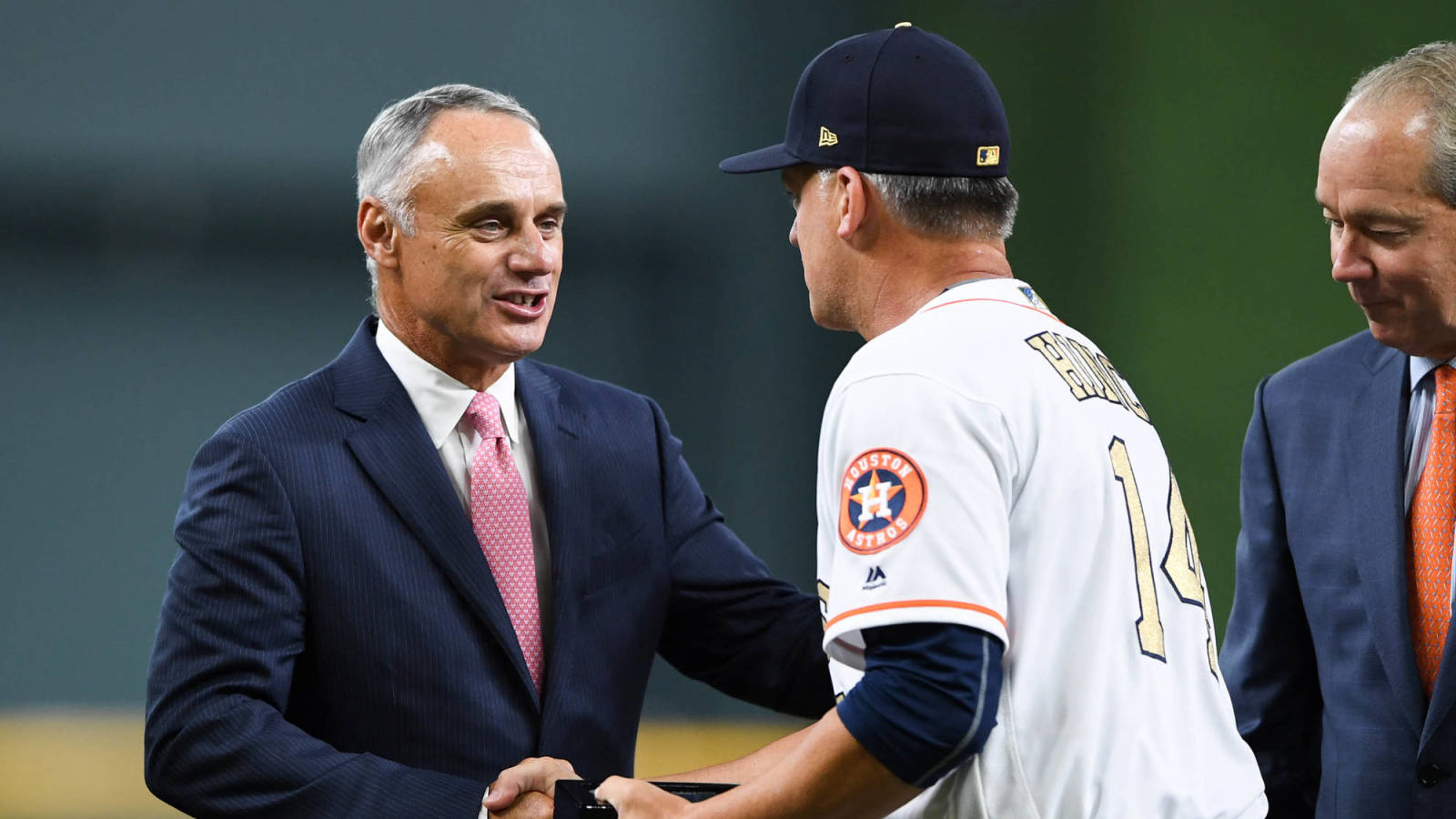 In an interview with ESPN’s Karl Ravech and during a press conference  at the Braves’ Spring Training camp earlier today, commissioner Rob Manfred discussed a number of topics surrounding the game, but the bulk of attention was directly on the ongoing fallout from the Astros’ sign-stealing scandal.

Asked by Ravech why no Astros players were suspended or fined as part of the league’s investigation, Manfred said that “in a perfect world it would have happened. We ended up where we ended up in pursuit of really, I think, the most important goal of getting the facts and getting them out there for people to know it.”

Players were given immunity so that the league could freely acquire information on the details of the now-infamous sign-stealing process, which involved Astros players alerting (using signals ranging from whistling to banging a trash can) teammates at the plate as to what pitches were coming, after the Astros used real-time video technology to observe rival catchers’ signs. Such use of available video was forbade in a memo sent from the Commissioner’s Office to teams in 2017, but Manfred said Astros players weren’t made aware of the seriousness of the offense.

“The memorandum went to the general manager, and then nothing was done from the GM down,” Manfred said. “So we knew if we had disciplined the players in all likelihood we were going to have grievances and grievances that we were going to lose on the basis that we never properly informed them of the rules. Given those two things, No. 1, I knew where, or I’m certain where the responsibilities should lay in the first instance and given the fact we didn’t think we could make discipline stick with the players, we made the decision we made.”

Since the league’s ruling on the Astros’ punishment last month, Major League Baseball has faced widespread criticism from both fans and rival players about not only a seeming lack of discipline directed towards Houston players, but also at the franchise itself. While the Astros were fined $5M and lost four draft picks, the fact that the organization wasn’t formally stripped of its 2017 World Series title has not sat well with many around the sport.

As Manfred told the Associated Press and other journalists, the league considered such a singular measure but decided against taking the championship away from the Astros.

“First of all, it had never happened in baseball,” Manfred said.  “I am a precedent guy. The 2017 World Series will always be looked at as different, whether not you put an asterisk or ask for the trophy back. Once you go down that road as for changing the result on the field, I just don’t know where you stop.”

In regards to Astros players, Manfred told Ravech that the outrage directed at the team has served as a measure of additional punishment unto itself. “I think if you watch the players, watch their faces when they have to deal with this issue publicly, they have paid a price,” Manfred said. “To think they’re skipping down the road into spring training, happy, that’s just a mischaracterization of where we are.”

The early response to Manfred’s comments have not been positive, with particular criticism directed towards his rather flippant description of the Commissioner’s Trophy (as Manfred told Ravech, “The idea of an asterisk or asking for a piece of metal back seems like a futile act“). As much as the league and the Astros would like to put the incident behind them, that outcome doesn’t seem possible in the near future given the amount of attention that several of the game’s biggest stars continue to focus on the situation. It also doesn’t help that Astros management and players continue to dig themselves into deeper public relations holes on a near-daily basis, whether it’s giving non-specific apologies during awkward press conferences, being unduly outraged at being accused of different methods of cheating during the 2017-19 span, and all the while insisting that the 2017 World Series was legitimately won.

The heated comments between the Astros and rival players has troubled Manfred, particularly statements from such pitchers as Ross Stripling and Mike Clevinger that Astros players might be hit by pitches as retaliation. Manfred met with several MLB managers today, and told reporters at Sunday’s press event that, “I hope that I made it extremely clear to them that retaliation in-game by throwing at a batter intentionally will not be tolerated, whether it’s Houston or anybody else. It’s dangerous and it is not helpful to the current situation.”

In addition, Manfred told Ravech that the league is preparing “a memorandum about intentionally throwing at batters. It’s really dangerous. Completely independent from the Astros investigation, we’ll be issuing a memorandum on hit by pitches which will increase the disciplinary ramifications of that type of behavior. I think that will be a tool for dealing with whatever flows from the Houston situation.”

If the Astros controversy wasn’t enough, there’s also the other ongoing league investigation into another championship team’s alleged improper use of video equipment, namely the 2018 Red Sox. Manfred said that he hopes that investigation will be concluded within two weeks’ time. It isn’t known what punishment could await the Boston organization, though as with the Astros case, Red Sox players were also given immunity in exchange for their insight on the matter.