Band of the Week: Public Squares 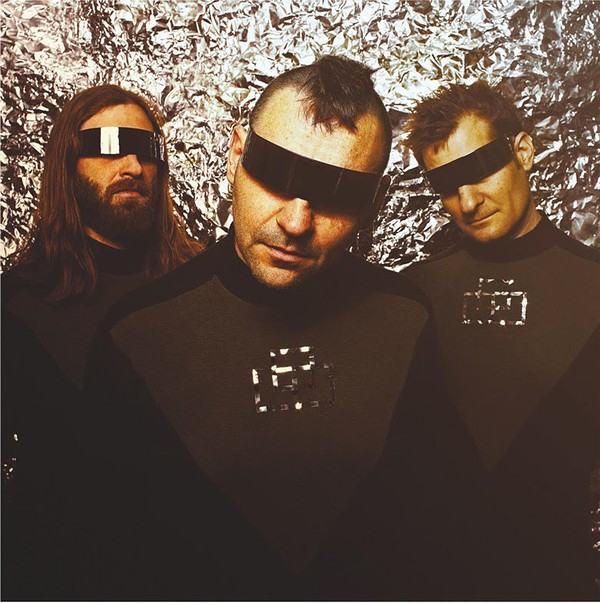 NO REAL PLAN IN MIND: From Up There, the latest album from this local act, serves as the soundtrack to a movie that “exists outside of this dimension.” Songs are “intertwined” with clips from the movie, showcasing the cast, which includes the likes of professional voice actor Ralph Gunderman, punk rocker Bill Stevenson (Descendents, ALL, Black Flag), Annie Hardy (Giant Drag) and Tony Erba (Face Value, 9 Shocks Terror, H100’s). A limited run of trading cards, one for each character, drawn by local artist Jake Kelly, accompanies the album’s release. Available on 12-inch vinyl, the disc was pressed at Gotta Groove. The locally based Wax Mage will release 25 hand-poured Wax Mage vinyl copies with “star dust” embedded in the vinyl. The album will also be available on CD and on all streaming and download sources.

AN ARRAY OF INFLUENCES: “We began recording the songs without a grand plan in mind,” says Abate. “Somewhere in the process, I started receiving ideas that involved something bigger than just a collection of songs. Influential records were Queen’s Flash Gordon soundtrack, Alice Cooper’s Welcome to My Nightmare, Ice Cube’s AmeriKKKas Most Wanted and the Who’s Quadrophenia — all records that have captivating elements between the songs that tend to be just as memorable as the songs themselves. The voice in my head told me, ‘Take this to a level far beyond these influences.'”

A CINEMATIC EXPERIENCE: For the release show, the band will perform the record in its entirety. “We plan to transform the Beachland Tavern into a space that will feel like a scene from a rock and roll sci-fi movie, which isn’t far from what it will actually be,” says Abate. ” We’re insanely excited about the other bands on the show, Mild Animals and Actual Form — both bands that we are all very fond of and will make for a great flow of music throughout the night. We highly advise being there for all the bands.”

WHERE YOU CAN HEAR THEM: publicsquaresband.com.

WHY YOU SHOULD HEAR THEM: Abate started wishing there was a movie and gave guest vocalists a rough idea of what to say. Abate says the vinyl format fit the concept perfectly. “Program Alpha,” the album’s lengthy opening track vacillates between spoken word interludes and riveting punk/hard rock segments that recall everyone from Dead Kennedys to Bauhaus. “In digital formats, Track 1 is the entire first side, and Track 2 is the entire second side,” says Abate. “The cast members we reached out to were eager to be involved, even though in most cases I’m not sure they fully understood what they were contributing to.”

WHERE YOU CAN SEE THEM: Public Squares perform with Mild Animals and Actual Form at 9 p.m. on Saturday, Dec. 7, at the Beachland Tavern.