Band of the Week: C-Level 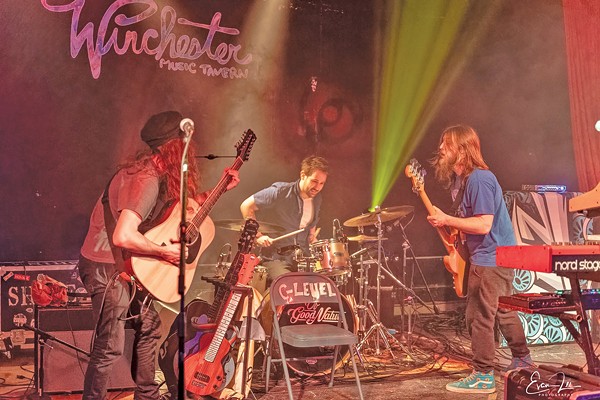 AN OPEN MIC NIGHT THING: Deitke started playing open mic nights when he was still in high school. “My dad would take me to open mic nights all over town,” he says. “I would learn from the local guys like George Hartwig and Frankie Starr. I was going to a mic night a week.” At one of the open mic nights in the mid-’00s in North Olmsted, he met bassist Coda Crose. Shortly after meeting, the two would launch the funk/soul/rock act C-Level. Initially, the band put out an album that Deitke refers to as “basement tapes.” Late last year, it issued Rights, and at this week’s show at the Winchester Music Tavern, it celebrates the release of Burn Your Own Gasoline.

A BRAND NEW SOUND: “This is a coming-into-our-own record,” says Deitke, who also works as a music teacher during the day, teaching adapted music lessons to kids with autism in grades pre-K to 12. “It’s not just us hashing out old songs we haven’t recorded yet. It’s a sound we’ve only recently developed. We’ve had several different drummers, but Pat [Boland] has redefined everything we do as a band.”

A NOVEL RELEASE PARTY: Deitke refers to the upcoming release party as “a weird way to pay homage to all our influences. We have set up an acoustic stage for artists who rarely or have never played solo,” he explains. “We have also arranged a visual art angle, in which multiple artists from [the local gallery] Negative Space will display their work on and off the stage. We want to make it this big immersive thing.”

WHERE YOU CAN HEAR THEM:

WHY YOU SHOULD HEAR THEM: The song “For Some Account” has a Sublime-like vibe to it; “Easy For” benefits from grunge-y guitars and cooing backing vocals; and “Rights” features an extended opening that consists of a bluesy guitar solo and plodding drums.

WHERE YOU CAN SEE THEM: C-Level performs with Rubix Groove, Green City Soul Machine, Mike Miller of Vibe and Direct, Charlie Wilson of Wanyama, Uncle Gnarley, Lea Marra of Lea Marra and the Dream Catchers, and Braxton Taylor of Sam Fox at 8 p.m. on Saturday, Jan. 18, at the Winchester Music Tavern in Lakewood.